Is it all about attitude? About teachings from a world record attempt

There’s a Swedish saying of “having too much water above one’s head”. Unfortunately it’s one of my favourite mistakes.

I had one good first try at taking the world record. Made 131m down, but not all the way up.  Then I had some hard training in being patient. For five days in a row I woke up ready to dive, only to be let down by hard wind and waves. Reloading every day took a lot of mental energy. When it was finally time to dive I was over-excited and I was over-breathing before the dive. I managed to get all the way down and had a great dive coming up, but some minute later I woke up on the surface from being in a shallow-water-blackout dream. Andrea Zuccari (with Freediving world, who organized the event) had assisted me to the surface when the lack of oxygen made me pass out at 10m. The shallow water blackout erases the short term memory and it took a few seconds before realization struck me. I didn’t make it. Next, I heard one thought racing through my mind:  “when can I try again?” As people around me looked worried and gave me reassuring smiles, I started counting months ahead. Can I have another go in August, or November? The notion of giving up doesn’t exist in my mind. I don’t have time to be disappointed. More than anything else I am just surprised – that’s how much I believed I would make the record.

But I failed to take the world record.
What I really did was making the same mistake again. I will re-write it as being overly optimistic, but it’s just my way of looking at it. My coach who sees things a little more objective said already from the beginning that I was short of time. Yes, two months to prepare and train for a world record is short. But it was all I could fit in, and I’m optimistic and think anything can be done with the right attitude. But there’s also the matter of pressure. Maybe one of the toughest challenges as a athlete.

Reality did hit me a few times. When I got back down from Kilimanjaro I wasn’t motivated to train for freediving. I needed time to adjust. But I trained anyway and realized after a few sessions that I was way out of freediving shape. I even considered to cancel the whole event. But since I hate giving up, I decided to do my best anyway.

Then I met a training buddy and to-be freediving coach Akim Adhari (Blue Immersion freediving school) who’s similar ideas about training motivated me over the clouds. I took off into the depths, trusting the new training regimen. And training went well. In no time at all I increased my breathhold, resistance to lactic acid and my depths. Only my equalization technique was a bit unreliable at best. I went down to 126m and it was an easy clean dive just a few days before the record attempt week, and made the decision it was enough to be able to add 2 more meters and secure the record. It wasn’t. It was optimistic.

But in the end – I didn’t fail. I learned so much during the last two months that couldn’t be learned any other way. I gained something I couldn’t have gained in any other way. I found new ways of looking at what happen, at not limiting myself to old beliefs and others beliefs, I got to know my body better, and I fell in love with the sea and freediving again.

I’m overly grateful for what I have done, what my body can do and most of all for all the fantastic people around me who supported me and have been my teachers. No one mentioned – no one forgotten. You know who you are – thank you!
One of my favourite teachers at Skandinaviska Ledarhögskolan reminded me of another positive fact: Now I can enjoy still having my fantastic goal of beating the world record for a bit longer, which means I have to freedive more! That’s attitude.

Another one of super-gifted photographer Nanna Kreutzmann‘s photos: 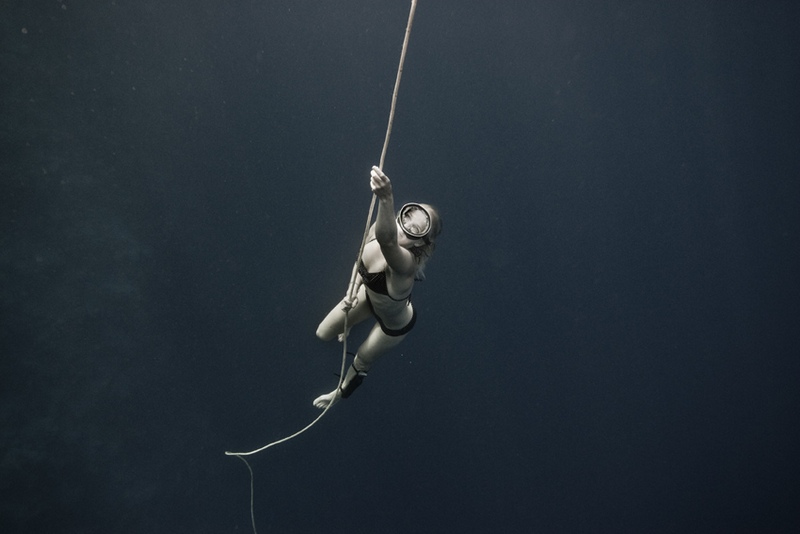